Student pilots have a lot to absorb about aviation.  Ground school, aircraft instruments and capabilities, weather and once all that is all of a sudden you have to pick up a microphone and talk to Air Traffic. Figuring out what to say and how to say it without sounding stupid is a challenge- the Tower and/or Flight Service can usually tell a new student within three words.  To prepare yourself (or your students) there are several steps you can take. 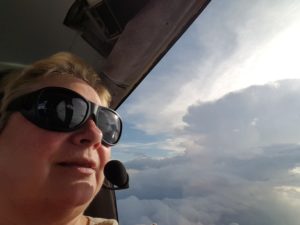 First, be very familiar with the aviation alphabet. (alpha, bravo, Charlie, etc…)  Standard phraseology was developed because radio transmissions are not always clear. The other aircraft and the ATC controllers are listening for certain things, if you speak in a non-standard way,  ATC may not understand what you want.

Get used to hearing yourself talk.  Practice with a tape recorder going over some of the more commonly used phrases.  Speak distinctly and slowly.  One of the most common student errors is to rush the contact, which muddles communication. Do not be afraid to ask the Tower or Flight Service specialist to slow down – let them know you are a student and they will go out of their way to work with you.

As you practice speaking into the microphone, envision the flight.  Mentally do your preflight check list, get in the plane and strapped in.  Have on a clipboard next to you all the frequencies that you will probably be required to dial into the radio.  Including UNICOM, Flight Service, ATIS, Approach, Tower and Ground Control. Crank up the engine.  Visualize picking up the microphone and dialing the local UNICOM frequency into the radio.  Listen first for a moment in case someone else is calling in .Now speak into the microphone as you depress the button, “UNICOM, Skyhawk one-two-three four Foxtrot (remember to say the numbers individually) taxing from Cutter to Runway 8.”    Don’t forget to let go of the button.

Taxi to the runway, keeping a look out of the windows to see any other ground traffic.  Once you have reached the runway and looked to see if anyone is landing or departing, you pick up the microphone again and announce your intentions.

If you have a flight plan, you will want to dial the flight service frequency into the radio.  “Bridgeport Radio, this is Skyhawk 1-2-3-4foxtrot, departing Sterling, over.”  Remember to give your position on initial call up.  Sometimes more than one frequency will light up on Radio’s console and you want them to use the one closest to you for clarity.

If Radio or any other ATC facility does not answer immediately, it may mean that they are talking to another aircraft on a different frequency, or that they are coordinating something on the landlines with another ATC facility.  Wait about 30 seconds and try again.  If you have tried three times and not received an answer, check to make sure your volume is up and the correct frequency dialed in.  If it is, and you have a backup radio, try using that one.  Eliminate the possibility of mechanical problems on your end first.  If another frequency for radio is in the area, try using that one – just in case the Remote Communications Outlet (RCO) is down.  If you still cannot get radio, then try contacting Flight Watch on 122.0.  They can relay your request to Radio and inform them that the RCO does not seem to be working.

All transmissions from you and from the ATC facility you are speaking to must be prefaced by your call sign.  This eliminates the possibility that other aircraft in the area may think ATC is talking to them.  Notice that after the first transmission, you can drop the first two numbers in the call sign.  You can also use November rather than your aircraft type. But whichever way you do it be consistent.

Before you call Bradley Approach  dial in the BDL ATIS frequency to listen to the weather and NOTAM information on the field.  Make a note of the ATIS letter designation. Just before Approach’s boundary, dial in the approach frequency, pick up the microphone and depress the button.

Think of all the options that Approach could give you and practice responding aloud while visualizing the physical actions you need to take to comply.  Keep an ear out for Approach to call you and give you the next instruction.  You already know that he will be giving you a frequency for Tower shortly, so be ready to dial it into the transmitter.

Dial in the new frequency, wait a beat to see if anyone else is talking, then:

Once you are cleared to land Tower will not normally address you again until you have touched down because they know that landing and departing takes all your concentration.  Once you are on the ground they will tell you to contact ground control and give you a frequency.   Change to that frequency for taxi instructions.

The language seems stilted and formal at first, but when you find yourself dealing with a lot of ATC instructions and radios alive with static, communication will be greatly enhanced when you know what to listen for.  ATC greatly appreciates pilots who correctly and clearly use the language of aviation.