↓ Skip to Main Content
Home › I Want This Job

I Want This Job

I was helping someone file a flight plan the other day and the pilot said he wanted to go here.  Here?  No, HEERE.  That struck me funny for some reason – pilot’s flying HEERE or THERE.  So I casually started looking at fixes used in flight plans and noticed that some names of waypoints, or intersections, seemed very….appropriate to the area the pilot was flying into.

Somebody at the FAA has a great sense of humor – whoever devises the 5 letter identifiers of the nation’s waypoints.  For instance in New England there are four waypoints:  ITAWT ITAWA PUTTY TTATT.  I’m guessing our mystery government employee is a Warner Brothers fan.  Southwest of that area on the New Jersey/New York border you will find references to Star Wars:  CHEWE, HANSS, YODAH, JABAH. 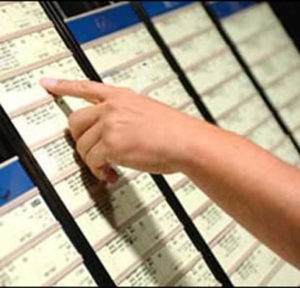 Although most letter combinations don’t seem to have a rhyme or reason, some are obvious.  For instance in the vicinity of Las Vegas you will see CHIPZ, RACES, POKRR, DEALR, CEASR, HITME and PURSE.   On the other side of the country, Melbourne, Florida is near the NASA launch site.  Waypoints there are appropriately named EARTH, APOLO, COMET, MOONS, LEUNA and ORRBT.   Tennessee memorializes some of its stars with waypoints called REABA, TWITY, and ELVIS.

MIKKI, MINEE, BUGGZ, and BUNIE live near Disneyland in Florida, while BUGSE still haunts Chicago.  You have COWBY in Arizona, and COBOY in New Mexico, though the Cowboy VOR (CVE) is appropriately in Dallas, TX.

Some of the waypoints you may only understand if you live in the area.  I grew up in Indianapolis and attended Butler University (BTTLR) where basketball (HUUPS) is played in Hinkle  (HNKLE) Stadium (STDUM).    Later I moved to Albuquerque, New Mexico so I know that coyotes (CYOTE) are seen from Tramway Blvd (TRAMY) all the way to the Bosque (BOSQE) and Albuquerque ARTCC (ZABCO) is north of town.

Don’t go to Las Vegas if you want to get LUCKI – it is in southern California.  You will find IRISH WHSKY in Vegas, but a SHMRK is found in Alaska!